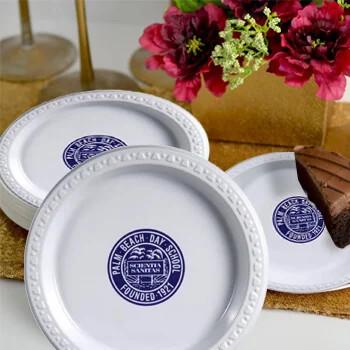 The usage of plastic is damaging our eco-system. No species on earth is blessed enough to escape the harmful effects of plastic pollution. Whether they are humans, animals or marine species the plastic has caused harm to all. Therefore to reduce this phenomenon the world is now looking for alternative means instead of using plastic materials. Even in cutlery people have found the alternative of plastic plates and plastic cups. Whether it is a small gathering, christenings, wedding party or other parties people are selecting the alternative of the plastic cutlery.

Nowadays people have become more aware of the damages caused by plastic pollution. This is why they are shifting towards disposable cutlery. It is the major reason why people like to use disposable plates and cups instead of plastic ones. Here we have discussed some of the adverse effects of the plastic cutlery usage and the benefits of using disposable cutlery.

1) Increase in the percentage of high carbon footprint

The plastic plates and plastic cups, as well as other plastic cutlery, are extremely responsible for increasing the carbon footprint. The manufacturing of these items releases very harmful toxic chemical compounds of carbon and other environment degrading elements in the atmosphere. Due to these procedures, the released carbon compounds gets combined with other harmful greenhouse gases and forms methane and other gases. These resulting gases are very harmful to the environment.

2) The exploitation of the environment

The manufacturing of the plastic plates, plastic cups and other plastic items involves the usage of harmful chemicals. These chemicals include names like vinyl chloride, benzene, carcinogenic and neurotoxic. These chemicals have an adverse effect on the environment.

After the utilization of plastic products, they are treated as a waste. Due to which some people try to burn them. This also increases the toxicity in the environment. These harmful chemicals which are released after the combustion of the plastic materials can cause some serious damage to the atmosphere.

The over-usage of plastic can release some of the most harmful chemicals in the atmosphere which can cause serious damage to human health. This harmful chemical can increase the chances of severe health conditions like liver or breast cancer, kidney stones and hormonal imbalances. Apart from all these eating hot food in plastic crockery can also increase the risk of other harmful diseases. This is because there are chemicals like Biphenyl A, dioxin and Phthalates which are released from the soft plastic.

1) Made from the renewable materials

Most of the disposable plates are made up of renewable materials like paper, sugar canes, potato starches and corn etc. These materials can be decomposed very easily. Most of the paper plates and paper cups are manufactured with plants. Therefore, it is very convenient to use.

2) Disposable materials are beneficial for the environment

According to various studies, it is found that every year almost 18 billion pounds of plastic gets released into the ocean. The plastic is responsible for causing severe harm to the ecosystem and other marine species. So, the disposable cutlery is way much safer as compared to this plastic cutlery.

3) Reduction in the dumping of waste

The increased usage of paper plates and paper cups has reduced the dumping of plastic waste in the open fields. This disposable cutlery can be easily disposed of as they decompose very easily. Therefore, the usage of disposable materials is very good for the environment.

One of the greatest advantages which a person can get after using disposable materials instead of plastic products is that the effect of harmful chemicals gets reduced to a great extent. This is because disposable materials like paper plates and paper cups don't release chemicals like dioxin and Biphenyl A etc.

Lastly, another major benefit which we get after using disposable plates and cups is that it is not necessary to wash them as they can be disposed of easily. Therefore, it decreases the usage of water. This can increase the conservation of water as well.

These are the major reasons behind the increased popularity of disposable cutlery. Due to these enormous benefits, people are now adopting disposable paper plates and cups more. Whether it is a wedding party or work Christmas party or any other kind of occasions this disposable cutlery can be used very conveniently.